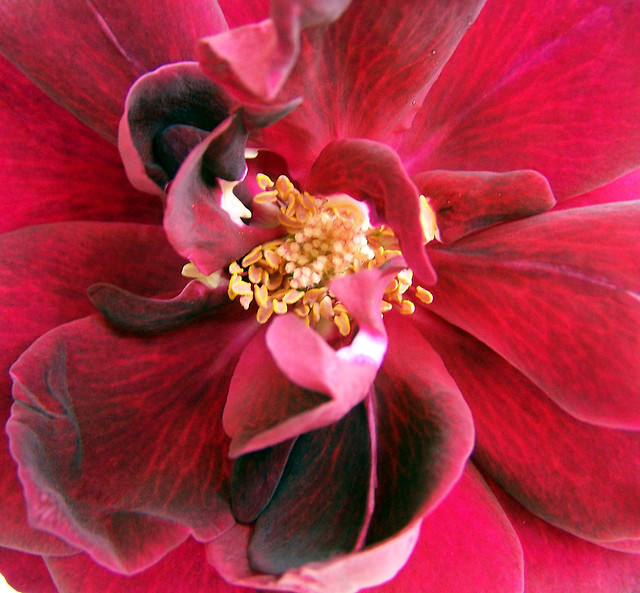 Recently, when referring to the intensity of colour generated by lower light levels at this time of year, Monty Don called late summer in the garden ‘the Velvet Time’, which struck me as a beautiful expression, and started me thinking about texture in the plants we use.

‘Velvet’ in French is ‘velours’ which, while sounding seductive, makes me think of bath towels and baggy leisurewear, which is not the effect I am hoping for. However in German it is ‘Samt’ which is linked to Samite, the luxurious, densely woven silk fabric from the Silk Road and the Middle Ages which could only be worn by members of the nobility and the church. And it is this opulence, saturated with dense colour, that I truly love.

When describing different plant elements we often use analogies of materials to define them; thus we have ‘leathery’ leaves, ‘silky’ poppy petals, ‘metallic’ eryngiums, all of which leave the reader with a clear idea of what to expect. But ‘velvet’ – now that has connotations all of its own. Close your eyes and think of velvet and what do you see? Richness, opulence, the feel of the pile slightly resisting the pressure of a fingertip, light on material showing darker where the plush has been pushed one way and paler the other. If velvet were a fragrance, what would it be? Damask rose, violet, incense… all deep, sensory overload perfumes.

Velvet in terms of foliage texture is interesting – nothing bristly or scratchy but softly strokeable, the kitten-eared silkiness of silver-leaved Stachys Byzantina and Salvia argentea which tempts one to reach out and caress the surface slowly, gently. Other leaves have a slightly powdery coating which look velvety until it comes off – Hosta ‘Blue Velvet’ is a disappointing case in point. But it is when petals come into the equation that velvet really kicks off. In terms of touch, many petals have a surface quality which is tangible – not, in this case, the orange-peel of Clematis tangutica ‘Bill McKenzie’, though this is certainly slightly velvety, nor the velvety-appearance of the flowers of Auriculas and some dahlias. No, the truly velvety flower has a depth of colour to it allied to its texture, and this depth of colour generally means, in flower terms, the rich reds and purples which lead us back to regal and ecclesiastical robes. Roses such as ‘Munstead Wood’ and ‘Guinée’ are so dark that they have to be placed carefully to catch the light so as not to get lost in the border; Hollyhocks, admittedly not the most regal of plants, share that texture as does the Mexican sunflower, the brilliant orange Tithonia and some of the violas and larger purple-faced pansies. Purple petunias, the fabulous blue and purple bearded irises, large flowered clematis and morning glories all share that special tactile quality.

Emerald green velvet? Yes it can be found in the softly yielding Common Pincushion Moss, Dicranoweisia cirrata, which forms beautiful rounded domes, cool to the touch and wonderful crowded onto trees or over stones in Japanese moss gardens.

Perhaps the fact that velvet absorbs light gives it the density which makes it so attractive, the fabric looking heavy even though it is made from silk, creating the contrast between the rich golden light of our late summer days and the darkest purple and crimson petals.

My personal choice has to be the chocolate scented Cosmos atrosanguineus ‘Chocamocha’ which delivers deep bronze-maroon petals worthy of a royal mantle, together with the sort of olfactory hit obtained from walking into a chocolaterie in Bruges. Fragrance, texture and beauty – all perfect for the Velvet Time of an Indian summer.