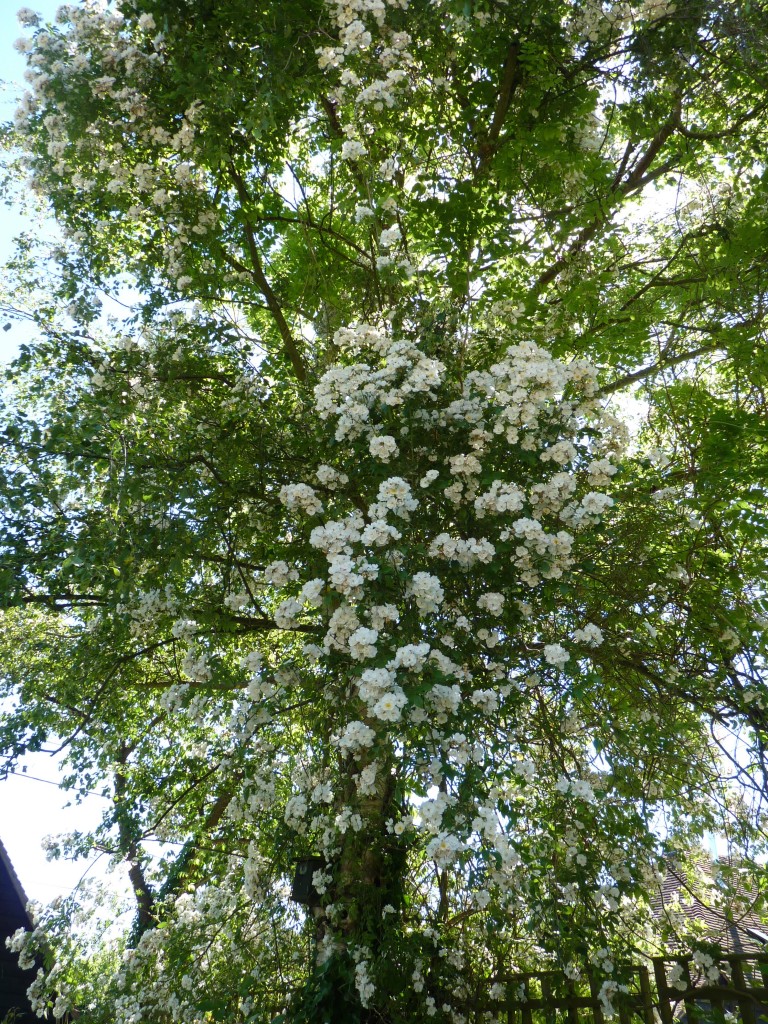 We all know about the value of verticals in planting – the rhythmic punctuation of obelisks or Veronicastrum, a cluster of tall drumstick Allium Purple Sensation, or even select forms of upright grass such as Calamagrostis Karl Foerster. But these only form half of the story; for true upward aspiration, consider using some of your tallest supporters in the garden – your trees.

Long practiced in mainland Europe, the art of growing a climber through a robust and tolerant host brings an entirely new dimension to your planting, giving colour and new perspectives. Pictured here is one of the roses in our Sussex garden. Rosa Rambling Rector has been scrambling through a silver birch for ten years now, achieving increasingly dizzy heights despite maintenance to the tree. Actually, my neighbours enjoy even better displays of blossom from it, as they live to the west. The rose has been joined by a blue wisteria which further extends the period of interest.

Until this year we also had an ash tree which in June was festooned with pink R. Paul’s Himalayan Musk and a Rambling Rector together. It was quite ravishing. Unfortunately the pink climbing rose seems to have sustained some kind of injury possibly during tree works last November and I am faced with cutting out rather a lot of dismal dead thorny wood. There are still some pink flowers on a few stems so the news is not all bad and I am optimistic that next year we will be able to enjoy swags of strawberry and cream bloom again.

Occasionally I can take credit for what is in fact a happy accident. I have a climbing form of Cecile Brunner, an adorable rose – every garden should have one to enjoy its little sugar candy rose buds. It was a little too happy in its position and threw up long wands which hooked themselves into next door’s maple and has been heading skyward ever since. Its neighbouring Clematis Montana has followed suit, using the rose as a climbing frame, and so for a good eight weeks the maple is decorated with pink against fresh green leaves.

So how do you persuade your climber to get started? Two basic tenets apply: don’t plant it too close to its host, and provide it with support until well established. Surprisingly, many will co-exist very happily despite dryness and shade. I have a willow (and we know how greedy they are) with a trunk entirely covered with creamy Madame Alfred Carrière and soft blue Clematis Perle d’Azur and when the two flower together, the effect is very pleasant. The tree trunk was cloaked in ivy before the rose was planted which gave it something to climb up. Sheer bark might pose more of a problem and require the rose to be tied in. Do take care to ensure that no thorny growth overhangs areas where it might catch passers-by.

Maintenance is admittedly tricky. Deadheading above head height is tiresome so choose a variety of rose which will produce hips of good colour, and sit back and relax. I have a very old cherry plum tree which wears a cape of white Rosa Kiftsgate which makes it look like a second flush of blossom and once the plums have been picked he tree is covered in tiny sprays of coral rose hips which the birds gradually work though over the winter.

Finally a note on hosts; try to use trees with a strong open structure which can bear the weight of a large rose with leaf, blossom and stem – they can act like a sail in high winds in summer and this may cause problems for which the only remedy will be a prickly session with loppers, though happily both rose and tree should soon recover.

I have seen roses grown through conifers in France and Belgium but somehow it looks contrived and the poor roses have little to hold onto. Some lighter climbers such as clematis can scramble up but their weight may pull the foliage down, showing the dark leafless interior of the tree. Personally, I wouldn’t bother. Instead, find a likely tree, choose a good thorny climber, plant it with compost and some manure in the hole a good 30-45cm from the trunk, and water well, providing an angled stake and tie in to prevent stems whipping in the wind and causing injury. Once above 2 metres tall, the rose should be off, up and away and the final pleasure is the bridal shower of confetti petals falling on the breeze as the roses fade for another summer.