Situated in a quiet corner of Berkshire, this part of a much larger garden had fallen into disuse some decades earlier when a previous owner moved the main entrance of the house to the opposite side of the building. The present owner decided she wished to develop the area for entertaining and relaxation, and to find a purpose for a formerly unused strip of ground behind the swimming pool wall.

The site is long and narrow with the length running parallel to and extending beyond the house on either side. The soil is a thin layer of topsoil on top of chalk and cold, drying winds present a challenge to establishing shrubs and trees.

We decided to divide the site into three ‘zones’, each with its own discrete feel: a new entrance area, a formal terrace and lawn, and an arboretum  – all three would flow easily and would allow the owner to use the spaces in different ways.

First of all old, overgrown shrubs were removed and new estate fencing and a matching gate now form the entrance to the area from the front of the property, allowing mowing and maintenance equipment to be brought in. 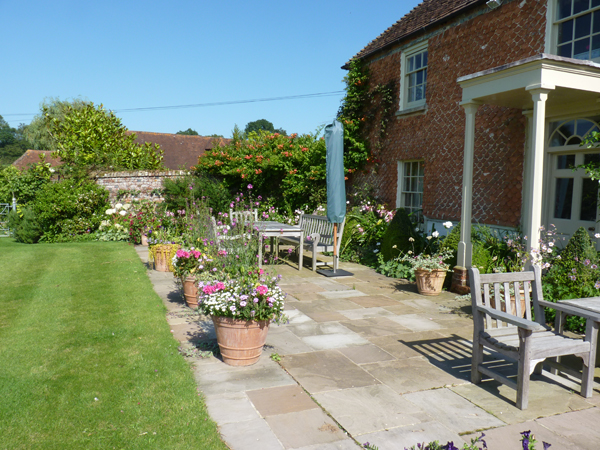 We then levelled the site at the house and laid a new sandstone terrace along its length, deep enough to hold dining tables and chairs and large planters. New borders were created along the walls, holding a mix of New English roses, Penstemon, Gaura and lavender and other perennials.

A major challenge was to fill the void between the former front door and the meadow beyond the boundary line; and our solution was to create a focal point directly opposite the door by means of a new bespoke gate set in an evergreen hedge, borrowing landscape from the farmland and woods as the backdrop. A large gate was selected to create impact and avoid it being ‘lost’ against the overall scale of the surrounding countryside. The gate has been painted the same colour as the other properties on the estate.

Finally the small Arboretum was established in the narrower area towards the pool house. A line of crab-apples provides spring blossom and autumn foliage and brightly coloured fruit for year-round interest. These can also be seen from the entrance driveway. A group of Acer ‘Butterfly’ compliment an existing Liquidambar by the wall and the white flowers on the two Cornus chinensis echo the white painted seat. Spring bulbs are planted in drifts amongst the trees.

New turf was laid once all the planting was completed. While the lawn is kept short in the formal area of the garden, it is left longer in the Arboretum with a path mown up the centre and focal points being provided by an antique stone circle planted with a rose and lavender and to a freshly painted decorative wheelbarrow seat backed by a semicircle of white-barked Silver Birch, Betula utilis var. jacquemontii. From there the path leads to a wooden door in the wall under a curtain of climbers. Additional plantings of ornamental shrubs, including groups of Hydrangea ‘Annabelle’, are included to mark the transition from informal to formal areas. 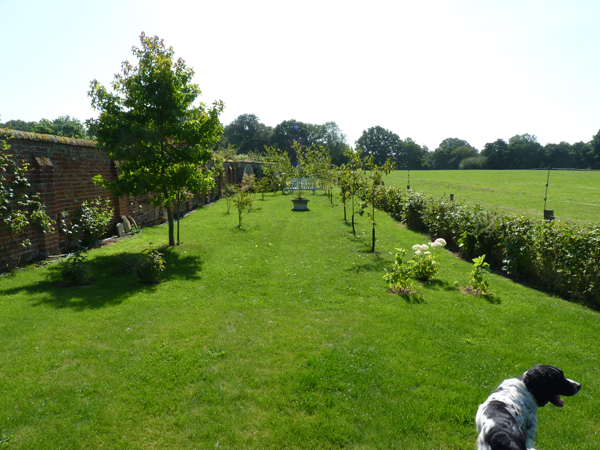 The field boundary was reinforced to prevent deer jumping onto the property. A mixed hedge of natural species runs along the Arboretum boundary to provide a wildlife corridor. However, the hedge in the formal part of the garden consists of Viburnum tinus ‘Eve Price’ with its attractive evergreen leaves and pink and white blossom, creating a sense of serene permanence against the changing agricultural landscape beyond.

The owner is now able to enjoy her new spaces to the full, both looking out from the windows of the house and also from within the different parts of her garden.