Project: An Arts and Crafts House in Essex

The owners of a large Arts and Crafts house asked Cornus Garden Design for help in addressing an imbalance in their garden layout. One side had always been cultivated with trees and shrubs, a pool and a long stone pergola while the other side had been kept clear for their children to play. Now the ‘football pitch’ was no longer required and the clients needed assistance in resolving the question of how to bring both sides of the garden back together again. 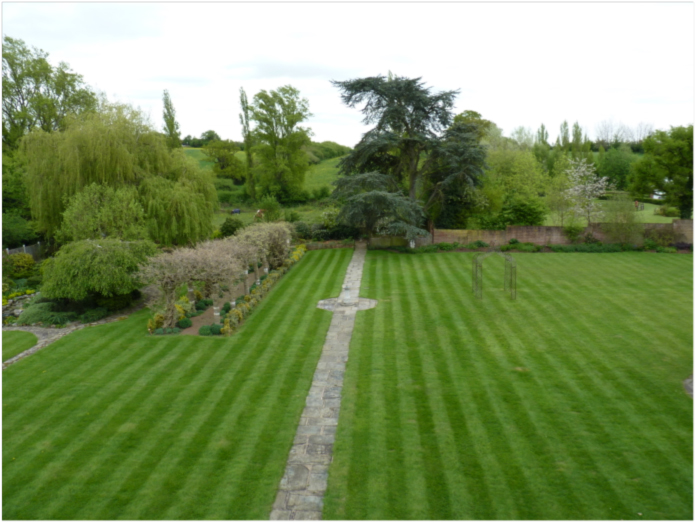 A site visit revealed that the area of the garden in question was backed by high brick walls and the borders were narrow, uneven in width and rather randomly planted. In addition, the garden lies in a frost pocket, and a gap had been cut in the boundary wall by neighbours to stop the  cold air collecting in their own garden, with the result that many of the specimens showed signs of being frosted or indeed killed by the cold air flowing through. As the border can also be seen from the house it was important that it should also be interesting visually from a distance as well as from close up.

Our recommendations were to extend the borders to an even depth, to consolidate the planting, removing those plants which were damaged and would not recover and to create a more interesting and a varied planting scheme based on groups of plants and colours rather than single specimens. To move away from the former ‘football pitch’ impression, the clients’ preferred scalloped edges were included but made into larger curves.

The planting plan is based on Gertrude Jekyll’s colour principles starting with cool blues and purples, moving through the spectrum to bright reds and oranges at the corner and then moving back to repeated blues and purples to conclude the planting. By deepening the border it became possible to create drifts of perennials and grasses and also to include mature shrubs, some of which were already in place. Painted timber obelisks planted with roses and contrasting clematis were added at regular intervals to provide height and punctuation.

The clients approved this proposal and a planting plan was drawn up together with a recommended schedule of quantities. As the clients are experienced gardeners with their own staff, they purchased the planting scheme, plant list and schedule so that they could to supply their own plants and put them in. At the same time they also added a large rose arbour structure and new paths. Altogether these alterations have made an enormous difference to the overall atmosphere of what was once a rather empty area and it is now a destination in its own right rather than a transit area to other parts of the gardens.