My garden in January 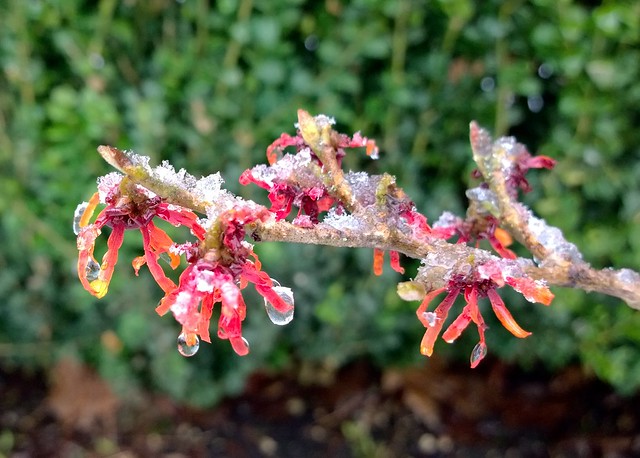 Reading through old posts I realise that I have always talked about specific plants or design styles, and not actually written in detail about our garden here in East Sussex, so for the next twelve months I plan to write regularly about what is happening here. Sometimes there might be more than one post a month, depending on how much is going on.

A brief history, then, of our garden; we moved here twenty years ago to find a newish garden which had narrow borders around its edges, thick gunky clay soil, large willow trees in the front garden, mature ash trees down the right hand border (we have a field next door) and no real design or structure. Because we were leading mad career-driven lives, gardening was restricted to weekends and while I had made purchases from local nurseries there was no structure or logic. A period of literally ‘gardening leave’ gave us the chance to review the layout and we had a professional landscaper modify the slight slope into two flat lawns linked by a low wall and step, deepen the borders, create more flow using paths and add a pergola. After that, we were on our own and it has been a learning curve ever sense in the best possible way.

After a career change leading to a post-grad diploma in garden design the garden became not just a place of enjoyable pottering but also my test bench for what grows well together – I am particularly interested in how plants look after the flowers are over – and as a result the borders rarely stay the same, which is all part of the fun.

So to January and what is happening outside as I write. We had all the borders thickly mulched in December with the result that emerging aconites and snowdrops, hellebores and a single blue hepatica glow against their dark brown background. But with yins there must be yangs and thus the new weeds are also clearly visible and I am working away, removing the eternal speedwell, threads of couch grass and continuing my battle against a tiny allium which forms deeply rooted clumps of onion-scented leaves which do little other than choke their better-behaved neighbours. Sources of joy are the Red Sentinel crab apples at the end of the back garden, which have kept their fruit so far and glow in the low winter sunlight. I plan to add Cornus Alba Sibirica to the mix when I stool my mature shrub in March to give continue the red effect lower down as well. A winter clematis (probably ‘Freckles’ but the label has vanished) has flowered for the first time and my Sarcococca is also in bloom. I’m slightly relieved about this as I gave it a rather serious haircut last summer as it was really out of shape and had resigned myself to no flowers this season as a result. But clearly it doesn’t discourage that easily and the tiny thread-like flowers are appearing by the backdoor, unleashing spools of fragrance on the cold air.

Bulbs in the pots are pushing through, Camellias are teasing us with fat buds not quite at the point of opening yet but we can see their rich colours (and thus pray that hard frosts will not interfere with their glory), Viburnum ‘Dawn’ is still going strong and the winter honeysuckle is flowering away in a sunny corner. Around the village, witchhazels are bright against dark green yew hedges and the narrow pale violet crocus are appearing in our lawn.

But already my Iris Unguicularis are almost over and I picked the last blue pencil stems on Saturday to enjoy them indoors away from the rain and sleet. It gave me a pang to realise that even in January, one plant has already had its day and will be silent until next winter, but then I looked across the woodland garden at the tiny cyclamen coming through and realised that gardening is not just a question of tasks and objectives – it is also a question of philosophical acceptance; seasons change, flowers fade and there are just some plants that you are never going to be able to grow because you don’t have the right soil, aspect, temperature or rainfall – and, given how many we are lucky to have to choose from, I guess that’s all right too.