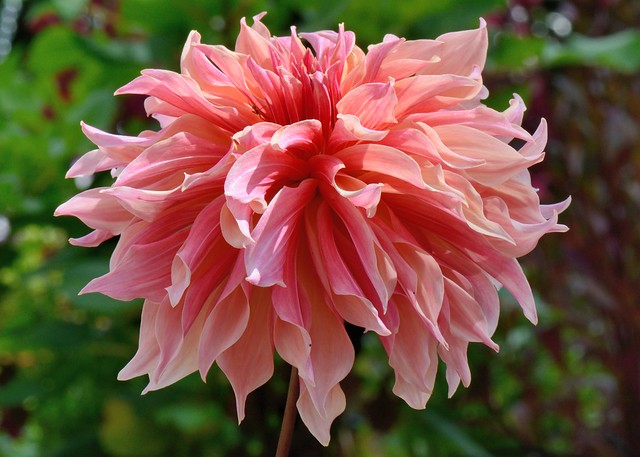 We have been away for nearly three weeks and in that time the garden has altered completely. Falling temperatures and light levels have prompted a reduction in flower quantity and a massive increase in the amount of acorns rattling down from the mature oak in the boundary hedge. Such changes highlight unexpected stars and one in particular has really surpassed itself.

Dahlia ‘Labyrinth’ was the result of a moment of retail therapy by the Co-Gardener on Sarah Raven’s website earlier this spring. With a view to broadening the range of dahlias grown here and to expand the colours we grow he chose a number of varieties which are new to us and clicked the ‘buy’ button. In due course the tubers arrived, were planted, labelled and watered. Some, as is often the case with new tubers, came out of the blocks and were brilliant over the summer while others quietly went about putting on leaves and stems and not much else. They were viewed with suspicion and there were murmurings about whether they might live to see a second season – particularly as by that stage we were not entirely certain what we were looking at as the label beside the plant was an unhelpful blank.

Yes, the quest for the perfect label marker continues – I find that if I can get one which writes properly on the white plastic, the point is generally too broad for my small handwriting. Continued use, especially in the greenhouse, clogs the writing end with compost dust and then the whole thing dries up and I get grumpy and bin it. Thus it was that the majority of the dahlias were labelled in pencil this spring and pencil, as you probably also know, is inclined to fade thus leading to head scratching and confusion. (Confusion which is doubled if someone has reused an old label so whatever is legible is highly unlikely to be whatever it is currently marking. But we won’t mention that.)

In any event, back we came from our travels to be met with an absolutely stunning dahlia which neither of us recognised or could remember planting and I had to refer back to the catalogue to identify it. The flower size is large – at least 8 inches across and the strong stems and foliage are a good bright green. But it is the colour that really makes me smile. The Sarah Raven catalogue shows it as an apricot but in actuality ‘Labyrinth’ is a fabulous mix of pinks, peach and even a slight tint of lilac. It may sound rather a mixture but trust me – it is beautiful. Packed with petals and pushing up to almost a metre tall it acts are a wonderful foil for the crimsons and purples of the autumn season.

If you grow it, try it in a big pot as we did and then you can move it into the best position to catch the lower sunlight in the afternoons where it will glow. The flowers last for ages in a vase (re-cut the stem under water to avoid an air lock) and do not droop. Of course there is the age old issue that when you bring your dahlias inside they will very likely have earwigs but I find that a quick riffle through the flower heads with a cocktail stick makes it easy to eject any passengers before they get past the kitchen door.

‘Labyrinth’ is clearly a late starter but none the worse for that – I am tempted to buy a few more for next year and really go to town with a mix of planting including asters such as Symphyotrichum ‘Little Carlow’ whose airy form would add a balance to the dense colours of the dahlia. This would entail planting them in a border so a bit of advance planning would be required when setting out annuals to ensure that there is some space as well as continuity of colour, and the ground will need to be well dug and prepared to provide as much nourishment as possible for the dahlias.

We will wait until the first frosts blacken the foliage before carefully lifting the tubers, labelling them and storing them in the barn. Although we have successfully over-wintered dahlias in the ground here in East Sussex, this is one treasure I really do not want to risk losing in a cold snap. Those fusillades of acorns are potential heralds of a hard winter ahead.