My favourite plant… May 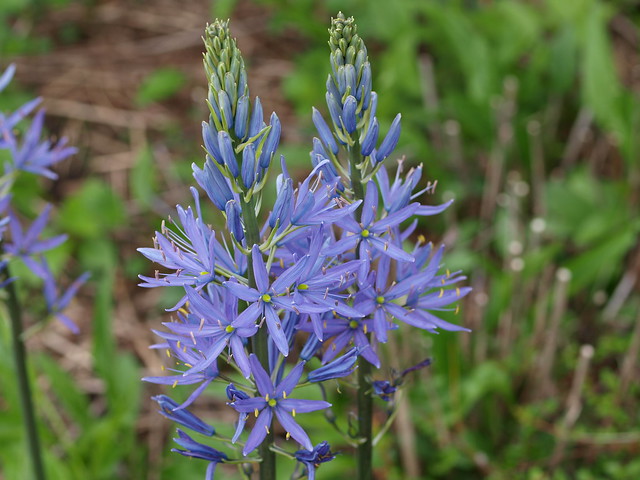 How do you choose a favourite from the myriad treasures currently vying for your attention? Given the warm April and very cold May, many of my usual May stars are still under wraps so any plant which is prepared to get up, dress up and show up, ignoring the chill, deserves a special mention and this year, I have to award my Favourite Plant status to the wonderful Camassia or Quamash.

This plant looks rather fine and is actually very tough. It originates in the prairie lands of North America where it puts up with sub-zero winters, hot summers and grazing animals. In its natural state it holds its own amidst competition from grasses and other plants seeking moisture and nutrients, and requires little in the way of cossetting in gardens other than the provision of a moisture-retentive soil and some sunshine. The roots are apparently edible, tasting a bit like sweet potato but with a more crystalline texture.

The species form, Camassia Esculenta, is a rich-blue, 25-35cm high and flowers in May to June. This is the shortest form, with others rising from 65 cm (Cam. Leichtlinii Blue Heaven) to 90 cm (Cam. Cusickii). The plants are available in a range of blues from deep violet to pale wisteria which all work well together so that they can be planted in drifts and allowed to naturalise if you have space. There are also white forms: Cam. Leichtlinii Alba and Cam. Leichtlinii Sacajawea, and a rare pink form is occasionally found, although I would keep that separate from the others.

The flowers are six-petalled with golden-yellow stamens and some have a green ‘eye’ at the centre. Think of them as a blue Eremurus if you will. The strong upright stems don’t wave around too much, unlike some other tall plants, and the flowers appear from the bottom of the flowering part of the stem, gradually opening up as the lower ones wither and wrap themselves round little bobbles of seed heads. These seeds for some reason disappear – possibly they are attractive to birds – and I have found unexpected plants elsewhere in the garden, but so few as to be a pleasant surprise rather than a nasty one.

I have mine planted in a border at the far end of the garden where they are tall enough to be visible from the house so I get to enjoy them, even when I’m not outside. They push up through clumps of white and purple Geranium Phaeum, providing a good balance to the fragile geranium flowers, whilst the geranium foliage hides the slightly ungainly strap-like leaves of the Camassia. The blues are succeeded by drifts of white which form a backdrop to early pink roses.

Cultivation is straightforward: plant bulbs 10cm deep and 15 cm apart or divide existing ones in the autumn, a feed in spring is beneficial, and ripe seed, sown in autumn, should also produce new plants. Once the leaves have turned yellow it is safe to take the old stem down. The only pest seems to be the occasional snail which hides in the leaves, but as these are at ground level and unobtrusive, there is nothing to worry about.

If you shop carefully you can find different varieties which, when planted together, will guarantee you a succession of flower for six to eight weeks and while there is always a lot of blossom around at this time of year, something which provides you with such continuous structure and stature is to be valued as a foil for other spring flowers, however overdue they may be.