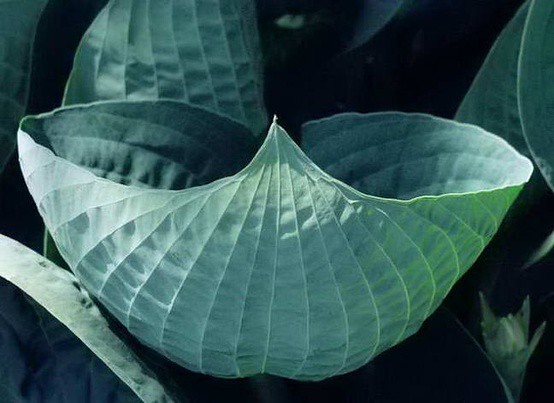 In a month which is so flower-packed and full of colour and fragrance, my favourite this June is chosen instead for its unusual leaves. No, not variegated, striped, blotched or fringed, but instead almost sculptural. Take a look at Hosta ‘Abiqua Drinking Gourd’ and you will see exactly what I mean.

The rich blue-green colour of the thick leaves makes it a good foil for most flowers, but it is the texture which I really like. Think of quilted ribs covered in the softest velveteen, like an old fashioned smocked tea-dress. Emerging from shoots which are fresh green in spring, the foliage develops a slightly waxy surface which repels water. Combine this with the deeply cup-shaped leaves and you get pools of water reflecting the light after rain. Please be careful not to touch the surface, however, as the coating lifts off, leaving finger prints behind. Also, if petals, leaves or other debris land in them, try to float them out with water to preserve the pristine effect.

Like most hostas, it does flower, producing stems with creamy white bell flowers in July, but this is a plant grown for its foliage and if you don’t want the flowers, then I’d snip them off as soon as they start to appear.

And joy of joys, it is deer and rabbit resistant and even slugs and snails seem to divert to other, less chewy options.

I grow mine in pots which allows me to admire them close up, but they are equally content in borders where their architectural shape contrasts happily with more floating, incised foliage. The maximum height is 60-70 cm. The plants are happiest in shade where the blue colouring can develop to its maximum – in sun you may find it fades a little. It isn’t choosy about soil, but like all hostas it does need moisture to do well.

It can be found in the catalogues of good growers such as Bowden Hostas (although having bought my first one there, I found the second (albeit unnamed) for £3.50 in Ikea). Finally, if you want confirmation of just how good a plant this is, then be assured that Hosta ‘Abiqua Drinking Gourd’ carries an AGM from the RHS in the UK and was named ‘Hosta of the Year 2014’ by the American Hosta Growers Association. It’s just fab.